Cultural diversity becomes lifestyle when you are brought up in Gujarat where business, commerce, equal rights/safety to women, and acceptable knowledge of regional language attracted educated people from all walks of life, other states of India and across the borders too! It automatically becomes a blessing when you are born and raised in such environment and obviously, dance cannot be ignored for somebody who is a lifelong student of performing arts. With all this migration of quality people, t’was a norm to hear news of some cultural association (at times not even registered) celebrating their festival every month and dance being part of it. Gandhinagar(capital of Gujarat)is place where people migrated for government jobs (strictly via entrance exams or transfers) so obviously more than 90% of population is educated to some decent level of education or had thorough knowledge of performing arts as Govt. of Gujarat had opened its doors to several non-profit organizations and associations to promote art & culture of India along with just nurturing Gujarati culture. Some migrated to Ahmedabad (main business city) for business or professional careers (esp. educated women and young girls) due to equal opportunity and safe environment for working women/college girls. 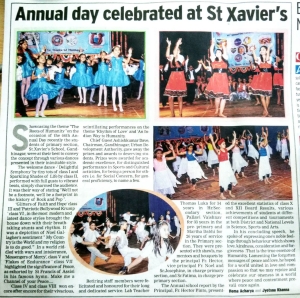 Recent Release Picture/article (2015-2016) of Annual Show by St.Xaviers School, Gandhinagar. For over 40 years, school has been celebrating focusing to various themes. Trainings are provided by local dance teachers or professional instructors whose students study @ the school.

From small pocket size dance schools, passionate dancers w/dance academies (such as Darpana) to educational schools (such as St.Xaviers & Mt.Carmel Convent Schools), had their own events planned through out the school year such as annual day, sports day, teachers day, their inter-school competitions/Odyssey, Eid, Diwali, or Christmas. At least twice a year, schools supported major city events such as Independence Day, Republic Day or any other extraordinary events happening in city! Whole city along with renowned artists from performing arts and govt. delegates were invited so training had to be given to students. Events would either happen at city hall or helipad so the costume requirement, dance props usage was compulsory pertaining to dance. The entire show was about glimpse of India where in at least 5-8 minutes of stage time was exclusively given for each performance with a detailed description of state/region or culture (at-least one type of) identification and choreographer/trainers name if they permitted to be announced. Participation levels were close to 99% as they were absolute FUN! Schools encouraged students to participate by giving extra marks as in cultural activities. The instructors were invited to offer these classes most of times at very nominal price for schools or was free if your group/classroom chose to do it strictly under school name. The program would then end with some stunts by Indian Air-Force pilots, parades and salute to Indian heroes.

All of that doesn’t happen in day or just 10-12 classes! Folk Dances of India are not like Bollywood dances where you can have somebody dance on song and you got it! None of the techniques of Folk Dances of India has any basic movement that matches in anyway if you were to focus on learning folk dance, even it is for fun! It is not possible. As we(Ms. Joshi) remembers after-school practices 2-3 times a week for at-least an hour or two in corridors of school. That is 6-8 hours per week of commitment, at times non-stop through out the year. It wasn’t about perfection; it was about fundamentals because you were to show that in front of knowledgeable audiences and LIVE telecast by various TV channels. Those were our school years!

The dances during those times for these events were never Bollywood dances as Gujarat had a very well established line-up of events by various organizations/association and government departments that would conduct folk dance competitions and had attractive prizes as in cash prizes plus hotel discounts, household appliances and memberships to family clubs such as YMCA, Rajpath, and Rotary Clubs. We are talking of lakhs of INR rupees and not just a couple thousand rupees or a trophy with a picture! Judges were from various tourism departments to PHD holders or Masters degree holders in performing arts or were dance professors/teachers in college/universities. These events were frequently organized so any group that called for avid dancers was a grab & go opportunity for pretty much any student in college who loved to dance. At times, we planned our choreographies right after we got the win if it was 2nd or 3rd place to not miss on our bigger share of pocket money-as we called it! Creativity was an absolute requirement in choreography, techniques, and costumes along with other factors in such a tight competition without forsaking fundamental basics of dance form.

Obviously Bollywood did not stand a chance in this! Back then; Bollywood was referred as hindi movies with beautiful songs/lyrics and not really about dance due to dominance of above competitions in the field of performing arts. Nobody wanted their daughters to dance like Helen or Bobby as in Dimple Kapadia, or boys to dance like Mithun Chakravarti, Jitendra (no-way) but rather Hemamalini, Sridevi had set examples of Bollywood style of classical dances where Bharatnatyam had gained popularity and for budding artists, singing classes would go in full-thanks to our Kishor Da & Gulzar! Obviously, as we further embraced western cultures, Madhuri Dixit Nene, Sridevi, Meenakshi Sheshadri and such other dancers made their way to introducing modern dance moves successfully in-spite of being trained classical dancers and we can only imagine how much work they must have put in to achieve all of that in lime-light!

None from ALL of the above is a day of work or few classes’ work! It was more than that. You’ll know when you have gone through it just as we know it and so our students learn it, just as well. This is applicable to all recreational programs or private groups as well depending on program you join at Grace And Grooves.

While competition programs such as Grace And Grooves Elite Teams are for those who want to learn how to handle it with pressures and would like to make it as their way of life, like it is ours.

Our elite dancers are trained in least 2 dance forms (Not Bollywood) for at-least a year as a routine, or at professional & competitive level to bring them at our Elite level & ignite their creativity.

After all, dance is all about having fun and we like to keep it that way!

Copyright Reach Media for Grace And Grooves | Grace Creations | 2012-2017. This material may not be published, broadcast, rewritten or redistributed without permission.